Chinese Lion Dance has two styles : The Northern Lion and the Southern Lion. 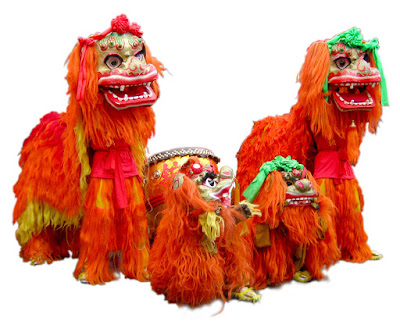 Photo Above : A family of Northern Lion (Parent and 2 children) of Hockien Association 斗湖福建會館京獅團, Tawau Town on 27 February 2010 during Spring Festival (Chinese New Year Celebration)
Chinese Northern Lion
The Northern Lion (北獅) Dances are usually performed  in pairs. Northern lions have shaggy orange and yellow hair.
A red bow on its head to indicate a male lion, or a green bow to represent a female lion.
During a performance, northern lions  movements are very life-like. Acrobatics are common, with stunts like lifts or balancing on a giant ball. Northern lions sometimes appear as a family, with two large "adult" lions and a pair of small "young lions". 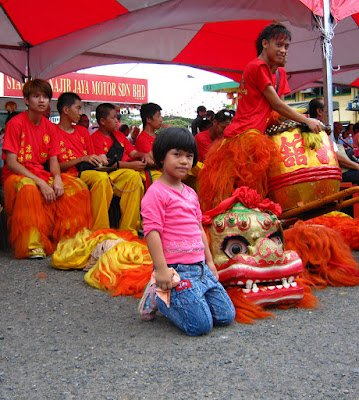 Photo Above : Yin, my sister, in front the Lion Dance Troupe.
There is no full time Lion Dancers in Tawau. All the Lion Dances we see in Tawau are performed by students and young men who practice a couple of months before the Chinese New Year. Lion Dance require team corporation with high disciplines. While Chinese Lion Dance is know to the world as part of Chinese traditional culture, but in Malaysia, this traditional art has broken it racial barrier to include young people of multi races.
Posted by Wong Chun Xing at 8:33 PM