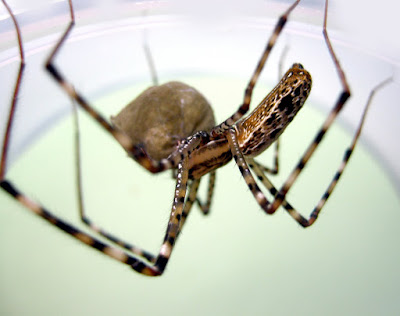 Photo above :  A Female Psechrus carrying her egg-sac in her chelicerae.

We found this female spider in Gomantong Cave during our visit on 11th September 2010. This Psechrus spider belong to Psechridae family. This species might possibly be a Psechrus curvipalpus.

With body lengths of up to 2 cm and funnel webs more than 1 m in diameter, they are the biggest cribellate spiders.

Female Psechrus carry their egg-sac in the chelicerae. They feature several characteristics normally found in ecribellate spiders, for example brood care behavior, and a colulus with no apparent function.

Psechurus is a cave dwelling spiders construct horizontal webs on the cave's ceiling and move below it. They have greatly elongated legs, with the last element being very flexible.

This Psechridae family are found around the Pacific such as in China, Myanmar, the Philippines and Thailand and  Borneo Island.

How many eyes does a spider usually has ? 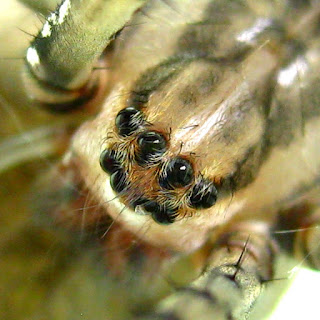 Spiders have 8 eyes. Some species have only 6 eyes. Some other species have eyes but are blind.
Photo above : Psechurus spider has 8 eyes in two rows. Both rows of eyes almost straight. 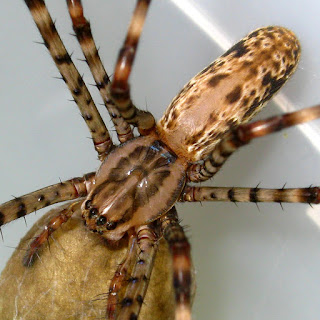 Photo Above : A close up look at the pattern of this female Psechrus we found in Gomantong Caves. We can only identify it to the Family Psechridae. No further clue to which species it belong. 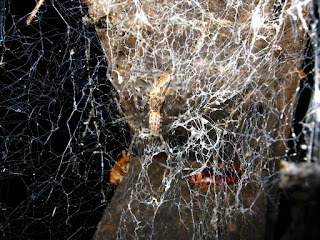 This species of spider can also be found in Madai Caves. Scientists found them in Batu Caves too.


This is another cave spider of the same species that I found on my first time in Gumantong Cave.


It is feeding on a captured moth.