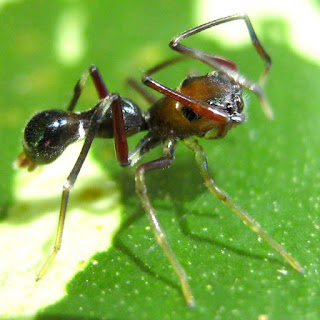 It's abdomen looks like that of an Orsima species.

Most people mistaken this crawling creature as an ant with "6 legs" and " a pair of antennae" swinging in the air.

But this is a spider with 8 legs.  The pair of it's front legs lifted up swinging in the air like a pair of antennae making this spider looking like an ant. It looks strikingly like a real ant to the untrained eyes.

This spider is believed to be an Agorius borneensis which imitate ants by waving their front legs in the air to act as antennae. This spider can be easily be mistaken as a member of the Myrmarachne genus which are the masters of Myrmecomorphy. 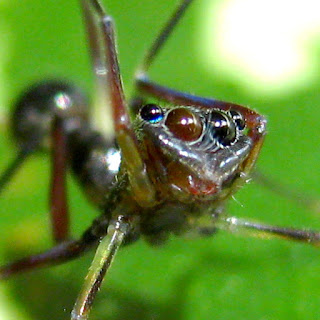 An ant has only 2 eyes but a jumping spider has 8 eyes. Seen in the photo above are 4 front eyes of the spider, another 4 eyes are located behind both side of its head.

Myrmarachne Spiders mainly occurs in the tropics from Africa to Australia. A few species occur in temperate regions.

South East Asia has about 80 described and many undescribed species, it is the most diverse genus of jumping spider in this region.

Borneo Island has many undescribed Ant-mimicry Spiders. This spider I found is new to us. It was found on the way walking out of Gomantong Caves. We thought it was a Myrmarachne spider at first but now we know that it is under the Agorius species.

So far I have found more than 10 different species of Antmimicking Spiders for the past 3 years. And I am greedy to discover some more.
Posted by Wong Chun Xing at 9:53 AM