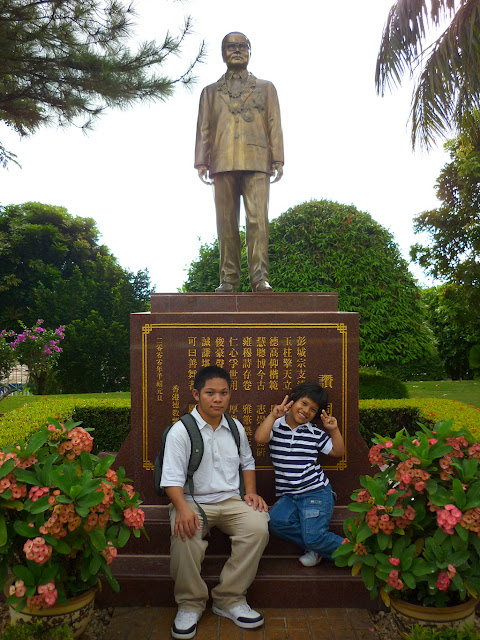 Very seldom we drive pass Lau Gek Poh Foundation Building.  If we do, the main gate was always closed

But today the gate is wide opened and we take the opportunity to drive in to have a look at his grand building and beautiful garden.

Lau was born in Swatow, Guangzhou and in 1936 at the age of 19 came to Sabah (British North Borneo).

His early works to earn a living including work as a fisherman in the Suluk Sea during which time  he acquaint with businessmen and traders from Indonesia. Business talented, Lau Gek Poh worked his way up the social ladders.

By 1946 he has reach the fame of Timber King and owned Hap Seng Company in Tawau.


"......The astute entrepreneur, who foresaw the opportunities with the formation of Malaysia and the new political scenario, went into the timber business in a big way, becoming the largest exporter of round logs from Sabah and earning himself the title “timber tycoon of Sabah"....."

His previous involvement in the timber business many environment protectionists today blame as destruction of the virgin rain forests around Tawau.

With the money from timber as capital investment, Lau explore other fields of business including dealerships in the Mercedes-Benz marque, property development, fertilizer, general trading, financial services, and plantations.

During his time as dealerships in the German cars Mercedes-Benz, Tawau has the most Mercedes cars in Malaysia. This explains the questions of some visitors to Tawau "Why Tawau has so many old Mercedes-Bens?”

In his later life, in 1991 he founded Lau Gek Poh Foundation and contributed generously toward education, scientific and charitable activities.

By 2008 his Foundation Building at Jalan Durahman, Mile 1, Tanjong Batu, Tawau  was fully completed and ready to host his funeral service attended by dignitaries and government officers.