The introduction of Roads and Cars here have became a threat to many animals who are not used to roads. Dogs are a common victim to the traffic so roadkill dogs are just an ordinary sight to the locals here. Cats are as common as dogs here but far less cats end up dead on / beside the road because of their agile nature. However there are some rarer animals that end up as roadkills.

10 years ago when I was still a little boy, my father showed me an unusual animal. It was found dead on a road, obviously another road victim. I was fascinated when I saw the mammal but also disgusted by it's stench of decay. It is has a muscular tail and the whole body is armored with overlapping thick scales. That was the first time I have seen a Pangolin.

The Leopard Cat is also another rarely seen animal because of it's shy nature. These nocturnal cats can be found in oil palm plantations living by preying on the abundant rats here. I have seen unlucky leopard cats on the highway several times. They usually died knocked by cars late at night when they are trying to cross the road to reach the opposite plantation. One of the roadkill cases recorded here in http://wongfookyee.blogspot.com/2011/12/leopard-cat-i-found-one-but.html

I have spotted another strange mammal 2 months ago. I am very happy to get a chance to see this rare Stink Badger at the same time sad to see it dead. Little is known about this species. Few photographs of this badger (also claimed as skunk) existed. They can secrete an unbearable foul smell like skunks. I have met a village folk who has told me about his funny experience with this mammal. He was still a young boy when his mother captured one badger by wrapping it with a towel but releasing it immediately after realizing that it can produce smelly secretions. The towel was "cursed" to be smelly forever. He claimed that even after months of soaking the towel in a stream, the smell still refused to leave. At first I was being doubtful because I know very well that we do not have skunks in Borneo, but this roadkill victim changed my belief. 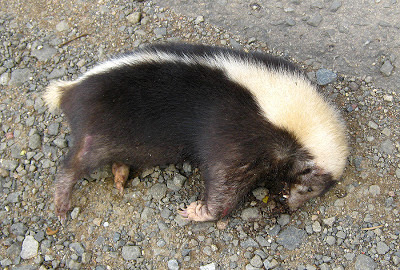 These are protected animals but as you can see, they are still vulnerable. I hope the Malaysian governors could do something to provide further protection to these animals. The drivers should also do their part in driving safely. I know that some drivers here just could not resist to run over an animal mercilessly.
Posted by Wong Chun Xing at 1:14 PM