Today Sunday. We made a trip to Tinagat Beach which we last visited was 5 years ago.  On the way we dropped in to visit the Guan Yin Temple which we not visited even longer.
While the beach greatly disappointed we with its PVC pollution, the temple greatly amazed us with its newly completed garden and hall.
Guan Yin Temple is the 2nd oldest temple in Tawau. (The oldest being the Guan Ti Temple in the town centre). Almost 100 years old and almost forgotten by the young generation of Chinese, but this old temple surprised us with it recent colorful new face uplift.
Forgotten but still surviving strong. There are 2 main reasons : The local government few years ago allocated to this temple an amount of temple fund; with continues economy stability the people want a higher quality of cultural and spiritual life. 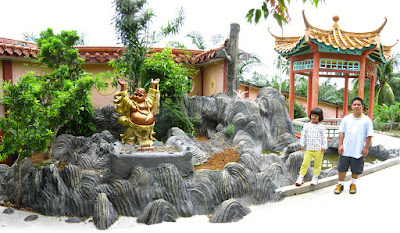 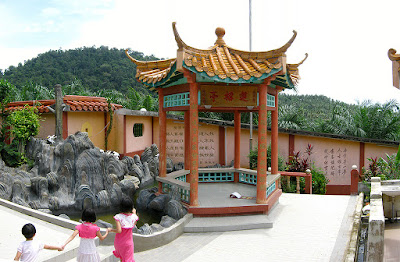 Buddhist temples are constructed and managed with society in mind. Temples are children friendly places. It should be.

Guan Yin Temple locate in a quite location 30 minutes drive from the town centre.

Tinagat Beach is just 5 minutes drive from this temple. As for Tinagat Beach, we did not spend too much time on this infamous beach of Sabah polluted with PVC.
Posted by Wong Chun Xing at 6:21 PM