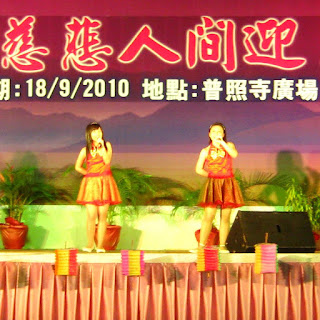 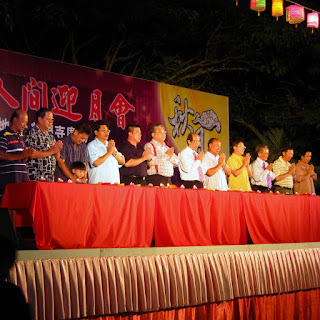 This festival falls on Chinese Calendar's  8th moon, 15th day that is 22nd September 2010.
The Tawau Buddhist Temple celebrate the festival on 18th September 2010 Saturday.
The Mooncake Festival (Lantern Festival or Mid-Autumn Festival) is believed to have originated from the ancient ceremony of Sacrificing to the Moon Goddess for the year's end harvest. This is when families return to celebrate and give thanks for the year's bounty.
The Mid-Autumn Festival is a traditional festivity for both the Han Chinese and minority nationalities inChina.
The custom of worshipping the moon can be traced back as far as the Xia and Shang Dynasties (2000B.C.-1066B.C.). In the Zhou Dynasty(1066B.C.-221B.C.), villagers held ceremonies in preparation for the arrival of winter and to celebrate the beauty of the new moon. In the later dynasties, mooncakes were baked and sent to relatives as gifts of family reunion.Traditionally, thirteen moon cakes were stacked into a pyramid to symbolise the thirteen moons of a "complete year," that is, twelve moons plus one intercalary moon.
Tonight, we went to a Mooncake celebration in Tawau Buddhist Temple. There are dancing, singing, lucky draw, body lantern costume competition, creative lantern competition and most of all, the one-hundred dishes meal. We can eat all we can as long as we don't waste. We are encouraged to bring home leftover foods or to give to the homeless.

There are enough chairs for all of us. Early birds can take the front seat. The tables in front the stage are for the VIPs.