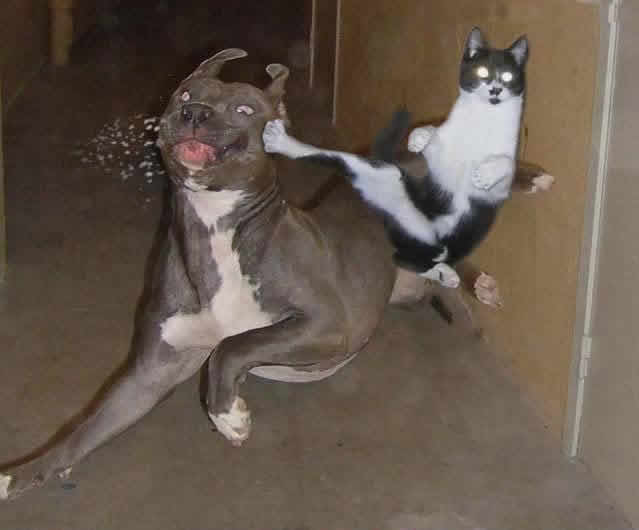 Dogs and cats are always known as natural enemies.
In the televisions, Internet, stories, cats and dogs seldom cope well with each other and are always fighting.
I know that this is shown commonly in Cats and Dogs, Tom and Jerry.......
I do not agree that cats and dogs are NATURAL ENEMIES !
Yesterday, while eating in a local Chinese restaurant, I saw a hungry street cat and a starving stray dog begging for foods together from outside the restaurant.
2 years ago, I saw a young adult puppy and a cat sleeping peacefully and comfortably with each other placing their heads together.
These are some proofs that cats and dogs are not enemies naturally.
But what about the dogs and cats that are seen fighting.
I think humans are responsible for those.
I believe that dogs reared by humans are aggressive towards other animals more than stray urban dogs.
This is because the dogs owned by people have become fierce to guard their master's house.
So naturally, the cats in the neighborhoods are always been barked by the dogs and naturally develops the hatred for dogs.
So if a tamed dog who lived with their master without other animal species has a chance to go out from their owner's house, they will chase smaller animals (usually cats) that they saw.
As for stray dogs, once, one came into the neighborhood and saw a tame cat.
The tame cat who has lived a life in fear of the neighbour's dogs switched itself into defence mode and started to meow aggressively with it's fur all upright.
The stray dog however, showed no interest in the cat and continued it's mission to find garbage foods while still being confronted by the fierce cat.
Who says that Cats and Dogs are natural enemies?
I know that many of them says that, believed that, but I am not convinced.
Posted by Wong Chun Xing at 9:41 PM