MERRY CHRISTMAS from the Christmas Gecko

MERRY CHRISTMAS
to everyone.
I have posted these few photographs on my blog as my Christmas Special. 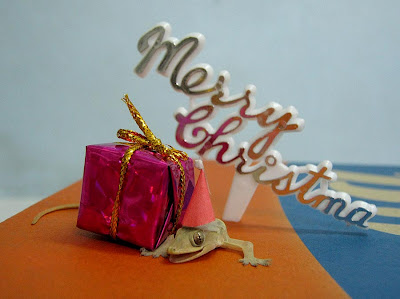 The Christmas Gecko.
My pet house gecko is happy with his huge present I gave him.
As you can see that he is smiling happily in front of the camera. 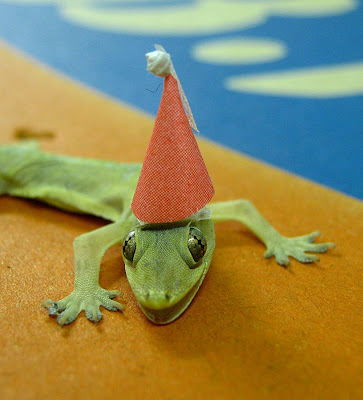 He is even thrilled when he found out that I have prepared a home-made Santa hat for him.
The hat isn't well-made because my fingers are just too big to do something that small.
You can see those bits of sellotape pieces sticking out of his hat.
The hat is not perfect but he accepted it with with love because he knew that it was from my heart. 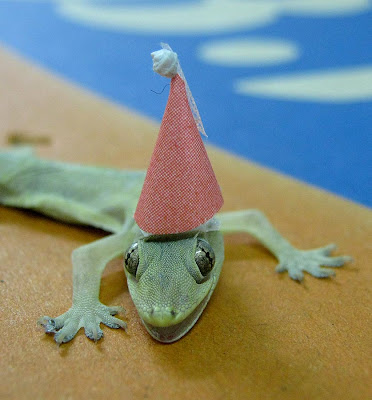 Just joking, it is not really my pet lizard.
It is a real gecko, not a fake one, but a dead one.
Since it is dead, I have decided to decorate it, give it some props and make it pose in front of my camera.
It's mouth was closed so I have to open it up so that it looks like he is happier.

The gift in the first photo was just something I removed from my small-sized decorated Christmas tree.
It's hat is made myself from papers.
The Christmas greeting plastic words with a missing "s" is taken from my mum's birthday cake.
It died just minutes before this photographs are taken.
Don't get me wrong, I did not kill it.
I found it paralyzed on my house floor, dying of unknown disease.
It is still too young to die of old age as it has not yet reached it's maximum size.
By the time I was studying his cause of death, it has stopped breathing.
This idea of making him my Christmas character came when I can't identify it's cause of death.
An ordinary gecko has passed away and became the CHRISTMAS GECKO, pretty scary but creative.
Posted by Wong Chun Xing at 11:03 PM

LOL this is funny :-D

So glad you like this!
It is a great honour to have a great Malaysian blogger commenting in my blog ;D