Malay Week started on March 29 2010 (Monday). For one week, all the students in our school should speak in Malaysian language. Whoever break this rule and speak other languages will be punished. On April 3 (Saturday) is the closing ceremony of the Malay Week. All the students and teachers went to the school hall to watch stage performances. There are Malay speech contest, Malay drama, Malay poem and singing Malay songs.

In the speech competition, Norman Chee, an excellent student talk about The Side Effects of Smoking. It is indeed a very good subject. At first, those students who loves smoking "boo" on him. But because of the way he talks- like a polititian, he managed to attract all the students and they shouted to show that they like him. Norman Chee is trained well by Calvary Church of Tawau. Because of these, he can do many things with flyng colors. He is good in stage performances and in academy. All of us expected him to get position number one in speech competition but in the end, the judges gave him only number two! How Sad! The student who got number one is a secondary 4 girl who is excellent in academy but not in stage performances. Everyone is unhappy about this, but the judges have already decided and said that this is fair. Students from our class join in the poem & drama. We acted according to the Malay poem. Our Malay teacher had provided us with Malaysian traditional costumes for our play. In the end, we got number second in Poem & drama. 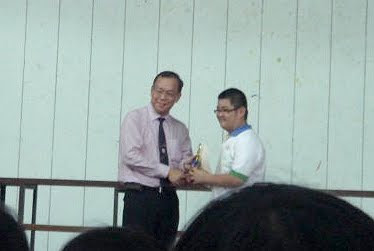