On 24 November, our tour group visited China's Shang Ri La in 阳朔 Yang Shuo, or also known as 世外桃源(shi wai tao yuan). 世外桃源 originally is a Chinese idiom describing about a beautiful place almost like paradise. This Chinese Shang Ri La is a park that has a lake. 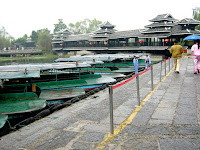 It was drizzling when we reached there. The rain and the wind made the weather very cold. That was the coldest place I had ever visited in this trip. We were brought around the lake on a boat by the park guide.  The lake water there is blue and clear. From the boat ride, we get to see traditional Chinese style wooden houses.

We passed by people wearing fake animal clothings, holding sticks and doing their dance. I guess they are the Red Indians of China. 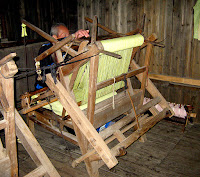 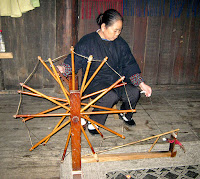 After our boat ride, a lady on the second floor of a building threw a few silk balls to us. She said whoever caught it can have it. In the souvenir shop, some locals are sitting down and working on their Chinese equipments and musical instruments. 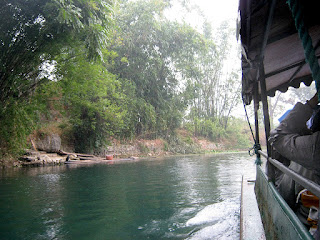 After a several more snapshots, we left and headed to our next destination.