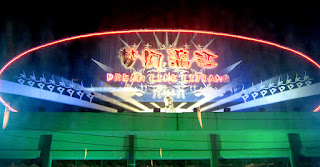 We We went to see the show Dreamlike Li Jiang 梦幻漓江 in Gui Lin on 24 November 2010 (Wednesday), our third day in China. This theater is built specially for this show only. The name of this show is named after one of the river that we are visiting, 漓江河 Li Jang river. This spectacular show is about the life in Li Jiang river. This stage performances consists of acrobats, dancing, arts and body twisting. And one more thing, NO CAMERAs in the theater. Unfortunately, photography is not allowed in there. Do not be afraid to miss the show when you really need to go to the washrooms. There are small televisions on the toilet walls showing the live telecast from there. 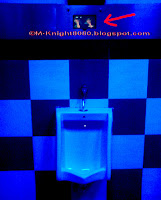 Pic from http://mknightquest.blogspot.com/2009/05/new-ballet-circus-dream-like-lijiang.html
The lighting effect is excellent, things appeared out of nowhere, for example a cardboard ship suddenly appeared out of the darkness. It makes me wonder where it came from. They also use laser beams to shine around and flat laser beams shined at the smoke they produced created an illusion of the clouds.
The first act is a storm in Li Jiang river. The storm clears and the background song becomes smoother. Then there is ladies in pixie clothings dancing. 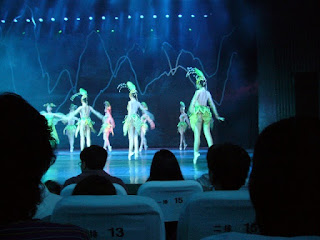 There is another act about inside the caves in Li Jiang river, performers act as bats and the stalactites and stalagmites they show looked like real. Another act is about the sailors and fishermen jumping on a cardboard ship. As they dance with their tridents, a man with Japanese hair style came out to the front and spin his beautiful trident around his body smoothly. Another man dressed exactly like him came out to join him and together they roll the trident around their body. Another act is about a group of boys and teens juggling their hats. 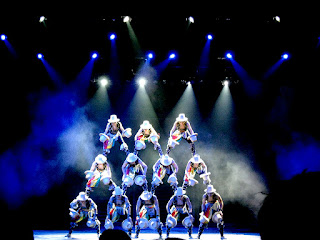 Pic from http://shanghai-matt.blogspot.com/2007/10/rather-cool-show.html
The then formed a human pyramid and all of them juggled their hats at the same time without dropping a single cap. There is one new act only created recently. It is a comedy act about a young boy and a girl fighting to sit on a chair and end up they become friends. Another act is performed by couples flying in the air by grabbing a long cloth tied from the stage ceiling and spinning themselves around. 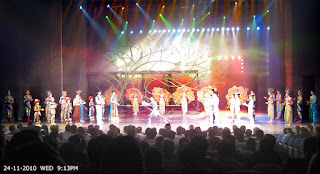 The performers showed themselves at the end of the show. 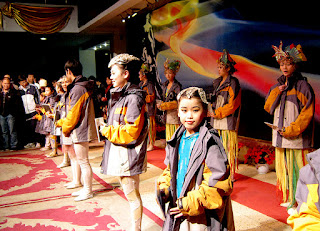 After the show, they gathered in the theater's entrance.
Each of them holding a CD/DVD video of this show for selling.
Some pictures during the show: 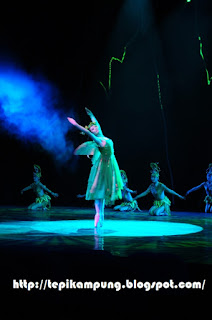 The main character of the show.
Pic from http://tepikampung.blogspot.com/2010/11/blog-post_19.html
For more information on this Dreamlike LiJiang Show and our China trip, please visit
Wong Family Website, Gui Lin Trip
Posted by Wong Chun Xing at 11:50 PM